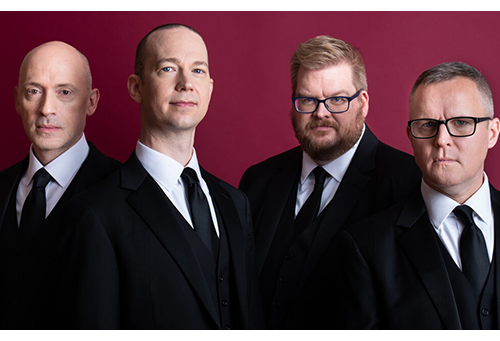 “…singers of superb musicianship and vocal allure,” (The New Yorker) give vibrant, modern voice to repertoire

The program will include:

This event is sponsored by the Worship Department.

Admission is free with advance registration through Eventbrite.

Virginia Theological Seminary is pleased to open our events to fully vaccinated guests. During the event, mask-wearing is required.

Praised for a “rich, natural sound that’s larger and more complex than the sum of its parts,” (NPR) New York Polyphony is one of the foremost vocal chamber ensembles active today. The four men, “singers of superb musicianship and vocal allure,” (The New Yorker) give vibrant, modern voice to repertoire ranging from Gregorian chant to cutting-edge compositions. Their dedication to innovative programming, as well as a focus on rare and rediscovered Renaissance and medieval works, has not only earned New York Polyphony two GRAMMY nominations and wide acclaim, but also helped to move early music into the classical mainstream.

About the Immanuel Chapel Concert Series

The Immanuel Chapel Concert Series at Virginia Theological Seminary provides educational opportunities for the Seminary community and outreach to Metropolitan Washington, with particular emphasis on sacred choral and organ music in the Anglican tradition.

Visitors to campus should be vaccinated and boosted. While indoors, all attendees are expected to wear masks.