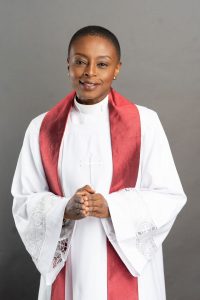 Despite the dominant male traditions, biblical concerns based on interpretation and the pushback from even women in the laity (especially around the issue of menstruation), these two men, and other supporting clergy like the Rt. Rev. Dr George Neequaye, the suffragan Bishop of the Diocese of Accra, were determined to proceed with this agenda.

The synodically governed nature of the diocese made it absolutely essential that the laity was in agreement. This was done by introducing women as servers of the sanctuary to allow the laity a foretaste of what it would be like to have women at the altar.
After a period of about eight years, the matter was brought to synod again and it passed. Three years later Stella Bentsi-Enchil, Susanna C. Naana Ackun, and Alberta Kennies Addo were ordained into the priesthood.

These women set the precedent for how a female priest would perform. Apart from Susanna C. Naana Ackun, who took ill and has been unable to work as a priest for years, the others have distinguished themselves. For example, Alberta Kennies Addo is the first and only female Canon, not only in the Anglican Diocese of Accra, but within the Internal Province of Ghana.

The experience of these three women, and the others to be ordained after them, has not been entirely smooth. It quickly emerged that no provision had been made for what a female priest should wear, especially head coverings, or how she should be addressed. In as much as the women were ordained, no special provision was made for mentorship or protection for them especially against the male clergy, many of whom were and are still opposed to female priesthood. One senior clergyman who was a young priest when Justice Ofei Akrofi first proposed the ordination of women at synod said,

As a result, some have suggested that female clergy should be conscientiously posted to parishes that are sympathetic to women clergy and to senior clergy who support the idea of women as priests. There are many challenges of female clergy within the diocese, especially their being seen as sexual objects by men and sometimes even clergy who were unable to see a woman as a colleague and not a potential lover. Additionally, the issue of pregnancy has never arisen because all the female clergy to date have either been beyond childbearing years, have finished having their children, or have clearly indicated a disinterest in getting married or having children.

An outstanding effort has been made by the leaders of the Accra Diocese to place women in the priesthood. However, there is more that needs to be done to establish them as legitimate parts of the clergy, with intentional provisions made for their needs, least of them being what they are called.