The Immanuel Chapel Concert Series at Virginia Theological Seminary supports our mission by providing educational opportunities for the VTS community and outreach to the city, with particular emphasis on sacred choral and organ music in the Anglican tradition. 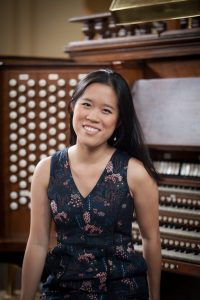 Janet Yieh will showcase the remarkable Taylor & Boody pipe organ in a varied program that will include audience participation in hymn singing.

Janet Yieh is Director of Music at Church of the Heavenly Rest on the Upper East Side in New York City where she oversees a vibrant music program for all ages, and plays the 138-rank Austin Organ. For seven years, she served as Associate Organist at Trinity Church Wall Street, where she founded the St. Paul’s Chapel Choir and accompanied the Grammy-nominated Choir of Trinity Wall Street.

An innovative concert recitalist and sacred music specialist, Janet was named one of ‘20 under 30’ promising artists by The Diapason. She has performed throughout the United States and across the globe, highlights include: New York’s Alice Tully Hall, Washington’s National Cathedral, San Francisco’s Grace Cathedral, Yale University’s Woolsey Hall, Taipei, Hong Kong, Japan, and Malaysia; collaboration with the Paul Winter Consort, the Washington Chorus at The Kennedy Center, NOVUS NY orchestra at Carnegie Hall; the American Guild of Organists’ 2022 National Convention in Seattle and the Association of Anglican Musicians’ National Conference in Richmond; the national radio show Pipedreams, WQXR-FM and two CD recordings.

In 2020, Janet co-founded a new platform ‘Amplify Female Composers’ with Carolyn Craig, and she contributes research to an international sacred music database called “A Great Host of Women Composers.” Janet has taught on the faculty for POE Summer Programs and played as staff organist for RSCM America Duke University and Providence, Rhode Island courses. She is an executive board member of the New York City American Guild of Organists, and a member of the Association of Anglican Musicians.

Janet holds double Masters degrees in Organ Performance from the Yale School of Music and Institute of Sacred Music, and a Bachelor of Music from The Juilliard School. While at Yale, she was appointed Organ Scholar at Christ Church, New Haven and Trinity Church on the Green, and directed music for Berkeley Divinity School. A native of Alexandria, Virginia, Janet is an alumna of St. Stephen’s and St. Agnes School and the Potomac Organ Institute. Janet’s former teachers include Thomas Murray, Paul Jacobs, John Walker, Wayne Earnest, Victoria Shields and Ruei-hwa Shyu.