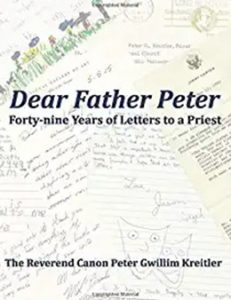 When the Reverend Canon Peter Kreitler discovered a stack of neatly preserved letters from his grandfather to his mother, he realized how much the advice they contained had shaped his wonderful mom. The discovery also got him thinking about the letters he had saved since his ordination to the priesthood in 1970.

“The exchange of letters between two people can tell a remarkable tale,” said the Very Rev. Ian S. Markham, Ph.D., dean and president of VTS. “A text emerges that captures the concerns, hopes, and fears of the writers. We are delighted to have been involved in the production of this remarkable book. It captures the richness of ministry and the richness of the life of Peter Krietler.”

At the heart of Dear Father Peter is a selection of those letters charting the many stages of Peter Kreitler’s almost five-decade career as a priest and environmental advocate. These letters and Kreitler’s commentaries on them are brimming with lessons for all of us who comprise what he calls “the priesthood of all believers.” He shares the guidance of family and friends who mentored him and the relationships and points of intersection that he forged with parishioners old and young as well as with celebrities and politicians. Kreitler doesn’t shy away from the criticism he received either, since the messages in those negative letters influenced him also.

Dear Father Peter highlights the foundational themes of his extraordinary life: his commitment to being a “pastor first,” who serves his community with creativity, acceptance, and dependable, caring presence; his prophetic call to save our fragile island home; the imperative of mutual respect and tolerance of all people; and the lessons we can learn from people of all ages, especially the youngest among us. Dear Father Peter is at once an unflinching and authentic autobiography, a tribute to those who shape and teach us, and a testimony to the simple but supremely powerful gift of being present for others.

Dear Father Peter encourages us to resurrect the art and discipline of letter writing; we would do well to heed this timeless counsel.

Peter Kreitler was educated at Brown University and Virginia Theological Seminary. His work as a parish priest and the executive director of Earth Service, Inc., an environmental education non-profit, and his travels across six continents cemented his belief that we are all one people whose multitude of gifts, belief systems, and styles have contributed to this remarkable world. The author of five other books—including The Earth’s Killer C’s: An Eco-Conservative’s Easy Guide to the Environment—Peter believes inclusivity, creativity, and persistence are the trinity of any successful ministry, and strongly advocates finding one’s own pathway to serve one’s God and creation. He and his wife, Katy, live in Pacific Palisades, CA and Harwich Port, MA.

Founded in 1823 as a beacon of hope in a country new and finding its way, Virginia Theological Seminary has led the way in forming leaders of the Episcopal Church, including: the Most Rev. John E. Hines (VTS 1933, D.D. 1946), former presiding bishop of the Episcopal Church; the Rt. Rev. John T. Walker (VTS 1954, D.D. 1978), the first African-American bishop of the Episcopal Diocese of Washington; and theologian, author and lay preacher Ms. Verna J. Dozier (VTS D.D. 1978). Serving the worldwide Anglican Communion, Virginia Theological Seminary educates approximately 25% of those being ordained who received residential theological education. Visit us online at www.vts.edu.

Back to VTS Press